Witnessing the demise of Matteo Renzi’s premiership I was reminded of something I wrote recently for Column, the in-house journal of 31/44 Architects (and which I include below). Researching the recent history of the Madama Villa for my PhD a few years ago I was very likely to come across images like that on the left in Fig. 1. But with the current fate of Renzi much in the press over the last few days, my eye was caught by the photograph on the right of Fig. 1 showing Renzi with Barack Obama at the Villa in, presumably, happier times.

The Villa has a long history as a diplomatic show-piece.[1] Belonging now to the Italian foreign ministry it is used to host, amongst other more mundane functions, summit meetings with, and press conferences for, foreign heads of state and other dignitaries. It began its existence as a suburban retreat for the family and friends of Cardinal Giulio di Giuliano de’ Medici who became Pope Clement VII during the building of his villa. Villa Madama has a somewhat ambiguous provenance which I have always felt suits its diplomatic pretensions and which was, more or less, what I wrote about for Column:

From a time before pre-Enlightenment disciplinary specialisation, the interdisciplinary, ‘scandalous,’[2] practice of the painter, architect and proto-archaeologist Raphael Sanzio provoked then, and still provokes unease. In particular the design of Villa Madama on Monte Mario in Rome continues to raise, specific questions – the central role played in the design of the Villa by Raphael’s now relatively unknown archaeological practice – but also general questions of architectural authorship and professional protectionism.

The letter from which the words in Fig.2 are taken unravelled a century’s worth of Raphael scholarship centred upon the uneasy provenance of the c.1517-1518 Villa Madama.[3] In 1968, 450 years after it was lost, this letter, written or dictated by Raphael to his client, Cardinal de’ Medici, was re-discovered in an archive in Florence by “young American student” Philip Foster.[4] The existence of the missing letter had, at that time, often been referred to, and long acknowledged; its subject, the Cardinal’s villa on Monte Mario, therefore guessed at; Raphael scholars, Renato Lefevre and David Coffin, had written a number of texts on the topic.[5] Yet the treatment by this missing letter of the Villa’s design, or even whether its contents would reveal any kind of design intent on the part of its putative author, was completely unknown. This was about to change;

Though the letter is unsigned its authorship is not seriously questioned: there is evidence, both literary and visual, from which some idea of Raphael’s original complete design can be gained […] The most complete and clearest evidence is the description of the project written presumably by Raphael himself in a letter perhaps to his friend Castiglione.[6]

Villa Madama, its design traditionally, yet at times reluctantly, attributed to Raphael, has been an unsettling building to those used to the orthodoxy of the classical orders and to the protectionism of professional cartels. After all, how could a painter design such a theoretically and archaeologically complex building? Especially since the only extant drawings of it belonged to designers more legitimately, perhaps, seen as architects.[7] Later, as disciplinary thresholds shifted, as the makers of architecture, gardens and paintings strengthened their disciplinary centres – either embracing or rejecting peripheral practices – the Villa’s owners and users have, it seems to me, been confronted with a structure of increasingly opaque cultural provenance.

Discomfort at the Villa’s dissident qualities were already beginning to manifest themselves in the decades immediately after the death of its architect; surveyed by Sebastiano Serlio in 1537 and then by Andrea Palladio sometime between 1541 and 1547 (Fig.3), their drawings reveal a studied suppression of the building’s unorthodox asymmetries. It has been argued that the strength of the formal, establishment, classical paradigm mis-inherited from Vitruvius into humanist Europe, convinced Palladio that he should re-imagine the Villa in more ‘correctly’ idealised form.[8] I would say more; that Palladio’s reconstruction of Raphael’s villa is an archaeological artefact which can also be categorised as an artefact of design processes. It was Raphael’s disciplinary promiscuity which provided him with the freedom to slip across and work between disciplinary centres – centres defined by renaissance classical formalism – and his expertise in related disciplines which allowed him to make those transgressions meaningfully. 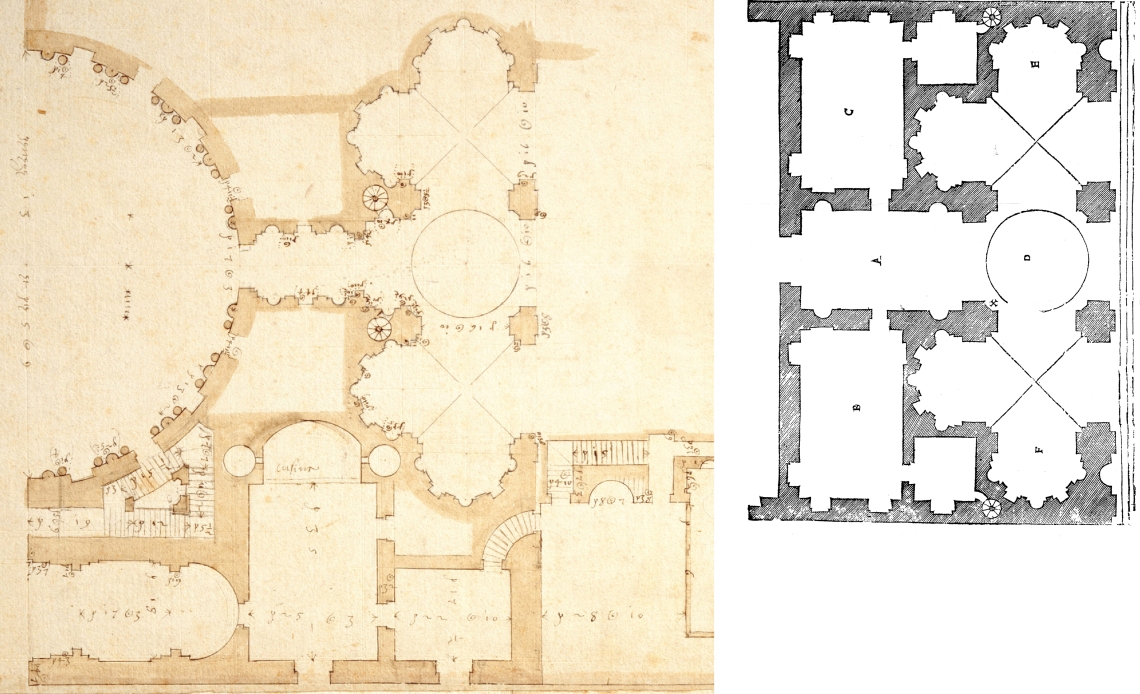 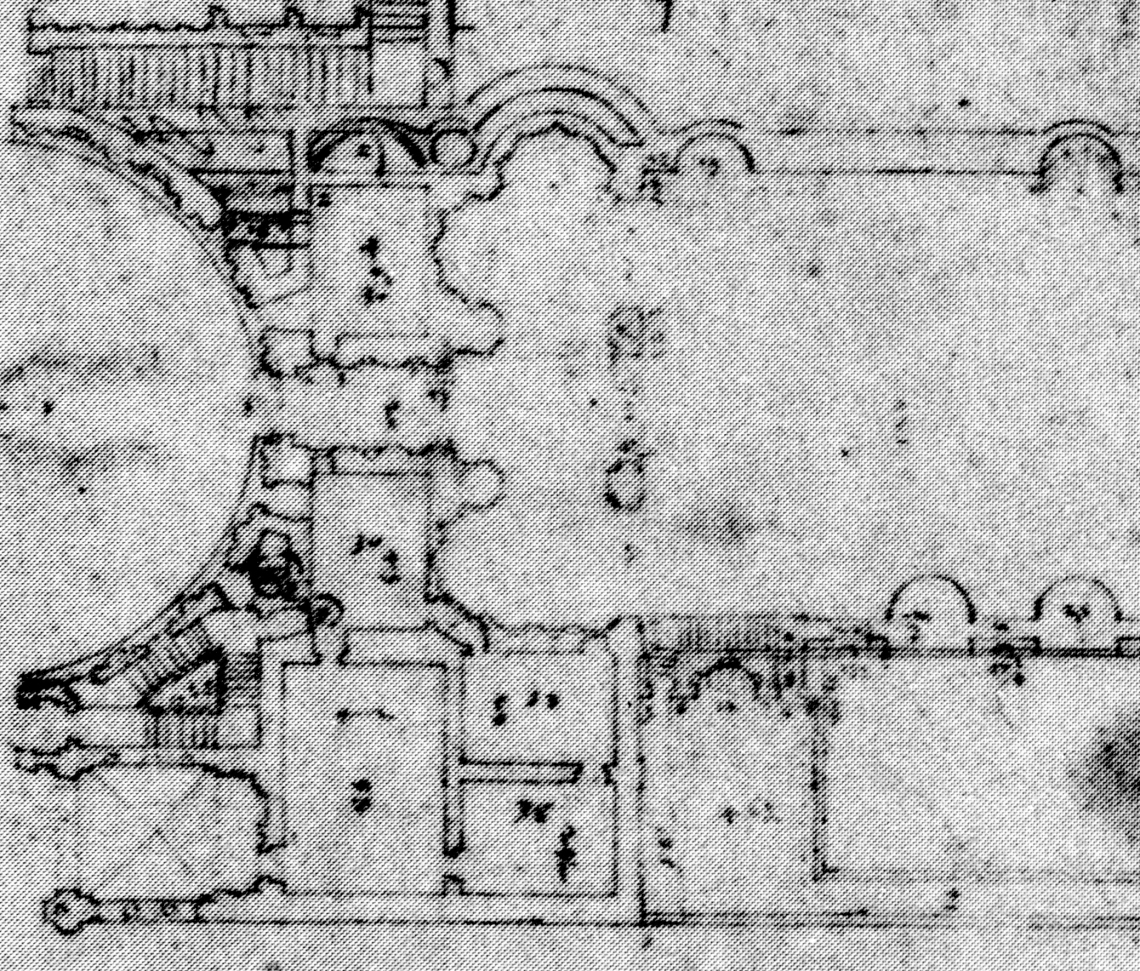 How then can we account of the drawings of Serlio and Palladio when compared to a more recent survey of the Villa (Fig.4), or even with a plan by Antonio da Sangallo, Raphael’s ‘executive architect’ (Fig.5)? I would argue that in Palladio’s view Villa Madama, as designed, is an inaccurate reconstruction of a classical, Vitruvian, villa and, because of this perceived inaccuracy, available to him for revision. His, Palladio’s, drawing of it, therefore, instead embodies the latest reconstructive thinking in the still nascent practice of archaeology. To correct this error, he reconstructs a Vitruvian villa, complete with symmetrical loggia. But Raphael’s source for the building he designed was the writer Pliny not the architect Vitruvius. 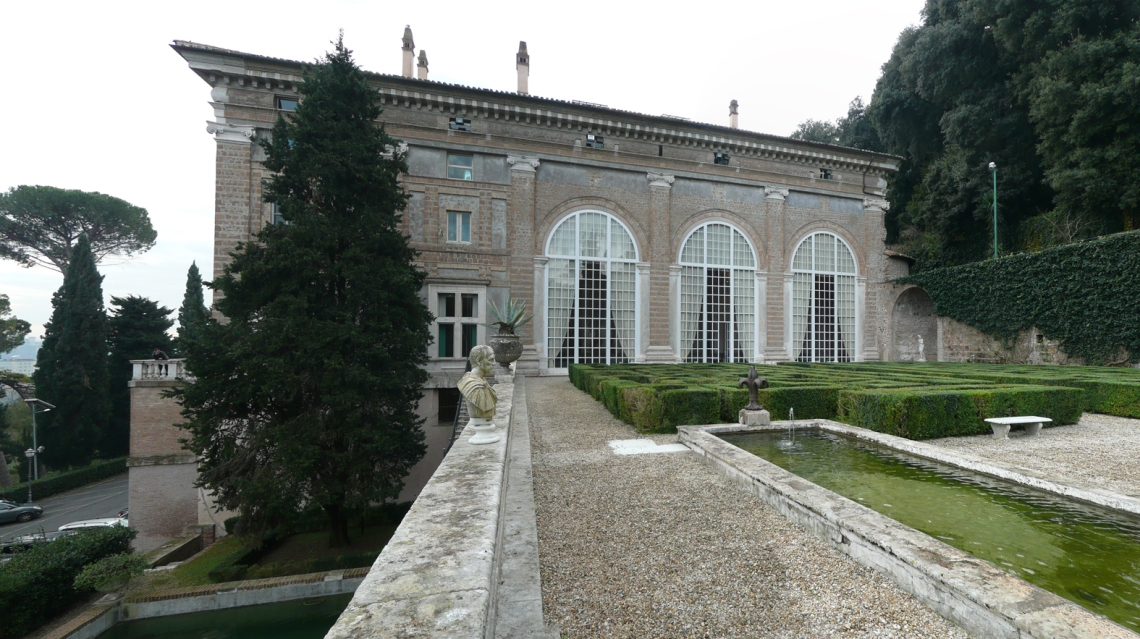 Key to understanding the significance of this Vitruvian-Plinian shift is the relationship between the space and the text of Villa Madama – specifically as those qualities relate to its great tripartite loggia (Fig.6), and in particular as they relate to its symmetry – or lack of it. In a famous letter by Pliny the Younger written towards the end of the 1st century to his friend Gallus, he describes his, now lost, villa at Laurentium on the coast near Ostia. Neither Pliny’s ‘Laurentine Villa’ nor its remains have ever been found so, until Raphael’s ‘version’ of it on Monte Mario, it existed only in textual form. The letter rediscovered by Foster is very reminiscent of Pliny’s description confirming it as a source and precedent for Raphael’s Villa. But I would suggest that it was much more than that; Villa Madama is an experimental and propositional, archaeological reconstruction (literally a reconstruction through physical experiment) of Pliny’s textual villa. These kinds of propositional reconstruction, centred around the Laurentine Villa continue to be the subject of much textual and drawn reconstruction.[9]

It is a sign of Raphael’s scandalous practice[10] – a practice which enabled him to make propositional reconstructions – that he neither sits comfortably within the renaissance model of architectural practice, preferring instead to take his own cues, not from the architect Vitruvius, but from the writer Pliny. Nor does Raphael’s art practice satisfy those who like their geniuses to be lone practitioners. Since Raphael’s principal discipline was not architecture, he was constrained less, it seems, by hegemonic paradigms of design and building. We do not have Raphael’s reconstructions of the ruins of ancient Rome’s buildings – he died at 37 before he could begin Pope Leo X’s commission for them – instead we have something altogether more intriguing, we have his theory of reconstruction, in designed and built form (Fig.7), to be found on top of Monte Mario, somewhere between architecture and archaeology.

Arnold, Dana. “Unlearning the Images of Archaeology.” In Envisioning the Past: Archaeology and the Image, edited by Sam Smiles and Stephanie Moser. Oxford: Blackwell, 2005.

———. The Villa in the Life of Renaissance Rome.  Princeton; Guildford: Princeton University Press, 1979.

du Prey, Pierre de la Ruffiniere. “The Joys of Emulation.” In The Villas of Pliny from Antiquity to Posterity, 212-80. Chicago; London: University of Chicago Press, 1994.

Zambelli, Alessandro. “Scandalous Artifacts: Practice between Archaeology and Architecture.” Architecture and Culture 1, no. 1-2 (2013): 182-201.

[2] I use the term, broadly, in the sense that Clause Levi-Strauss uses it. For him a scandal occurs when a practice ordinarily governed by a set of customary rules allows itself to be contingently governed by the customary rules of another practice. Claude Lévi-Strauss, The Elementary Structures of Kinship, trans. James Harle Bell and John Richard von Sturmer (London: Eyre & Spottiswoode, 1969 [1949]).

[8] Dana Arnold, “Unlearning the Images of Archaeology,” in Envisioning the Past: Archaeology and the Image, ed. Sam Smiles and Stephanie Moser (Oxford: Blackwell, 2005).

[9] The scope of this interest, particularly as it resurfaced in the 1980s and 1990s, is described here;  Pierre de la Ruffiniere du Prey, “The Joys of Emulation,” in The Villas of Pliny from Antiquity to Posterity (Chicago; London: University of Chicago Press, 1994). Through exhibitions such as that held at the Centre Canadien d’Architecture et le Musée des Beaux-Arts, in Montréal between 1983 and 1987. and an architectural competition held in 1981: Pascale Beaudet, “Expositions: La Villa Comme Archetype Architectural,” Vie des Arts 28, no. 113 (1983-1984).

[10] Alessandro Zambelli, “Scandalous Artifacts: Practice between Archaeology and Architecture,” Architecture and Culture 1, no. 1-2 (2013).