A recent call for papers for a special issue of the Architectural Theory Review recounted a brief meeting between Le Corbusier and Claude Levi-Strauss (main image above);

According to anecdote, Claude Levi-Strauss hosted Le Corbusier for a night when he was cultural counselor to the French Embassy in New York. The anthropologist and the architect, both notoriously voluble, had much to discuss, however all that is preserved of their conversation is a word of advice about interior design: Corbusier allegedly advised Levi-Strauss to leave an ornate salon designed by Stanford White untouched.

In a brief talk I gave at the University of Brighton earlier this year I attempted to make a connection between, not these specific characters, but between what are often considered opposed spheres of discourse personified through the work of a different architect/anthropologist pair;[1] to attempt to make explicit the unity between ‘professional practice’ in architecture and the ‘history and theory’ of architecture. A connection which is not always as obvious as it should be and whose de facto separation has created enormous problems for the practice of architecture broadly understood.

I lecture in both of what are usually termed ‘history and theory’ and ‘professional practice’ so, for example, pieces of construction legislation like the Construction (Design and Management) Regulations (CDM) – designed, admittedly very imperfectly, to protect construction and maintenance workers – are not, for me, always (or even often) deadening obstacles to creativity, but instead are theoretical positions about the very nature of building, given the force of law and enacted in the arena of the building site. There is no meaningful separation here between practice and theory. There are drawbacks – I can’t help but think that if perhaps Le Corbusier had written a risk assessment before going for a paddle off the coast of St Tropez in 1938 he might not have that terrifying scar. But there are also interesting revelations.

During the lecture I talked first about the Bank of England, a building which, in its current guise, was described by Nikolaus Pevsner as, “the greatest architectural crime, in the City of London, of the twentieth century.”[2] He said this because of the demolition of John Soane’s pre-existing building on that site depicted in Fig. 1 below.

Fig.1 Capturing the City: Photography at the Bank of England – Men working on top of lunettes on the Rotunda Inner Wall during the demolition of the south-east corner. c.1925-1939, © BoE Museum

So, here’s this astonishing photograph of some guys taking apart one of Soane’s domes at the Bank of England sometime between 1925 and 1939, and my first thought is – no heath and safety! Then, because I don’t see CDM as a piece of pernicious legislation – ‘health and safety gone mad,’ perhaps – I’m able to think of these workers not as destroyers but as makers.[3] So if they are makers what are they making? Perhaps they are making the building depicted in Fig. 2 – they are building a ruin. This is a possible reading because this image, made by Gandy for Soane, is so famous, so embedded in architectural history. 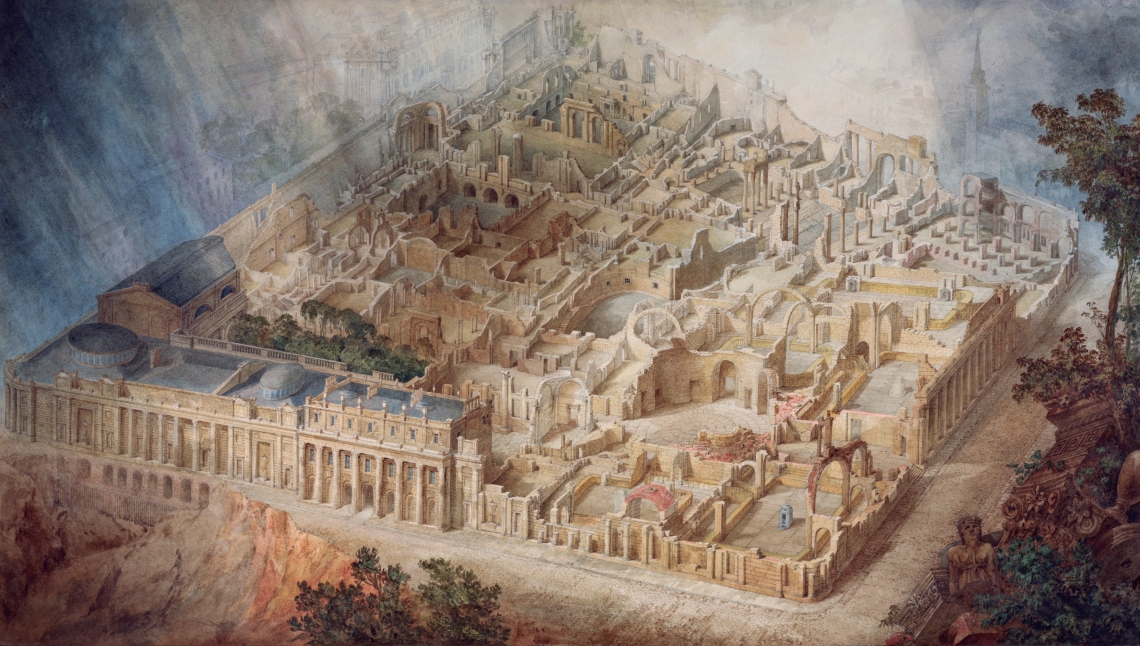 In this view, this image becomes a ‘production’ drawing from which the demolition builders are all working. For me, this unsettles the inevitability of temporally directional architectural production, uncouples it from the inertias of conventional construction processes from, for example, that other bête noire of architectural professional practice, the RIBA Plan of Work.

So if the demolition crew are really builders and the Gandy ruin is the so-called finished product, then what is the status of this ‘finished’ image of the Bank, also by Gandy (Fig. 3)? This image becomes, it seems to me, more like the site of the building – not an empty plot of land but a filled canvas depicting a completed building whose erasure is its object.

Fig.3 A view of the Consols Transfer Office at the Bank of England as built, drawn by Joseph Gandy with figures added by Antonio van Assen, Sir John Soane’s Museum

The CDM regulations – a quintessential artefact of architectural ‘professional practice’ – makes available modes of thinking differently about what it and professional practice more generally mean, what processes they drive. Looking at Gandy through a ‘professional practice’ lens, then, one might further ask how would one procure this building, this ruin? The relationship between ‘ruin’ and construction contracts already implied here and about which anthropology, through its chaîne opératoire, has much to say, will be the subject of another post.

[1] In the early to mid-1960s with western narratives of technical progress at their height, Scottish architect Robert Matthew, then president of the Royal Institute of British Architects, and French anthropologist André Leroi-Gourhan independently developed, or presided over the development respectively, of totalising, systematic, technical models of human progress. Each model was a reflection of the aims and methods of their respective discipline: for the anthropologist this was to be found in the inevitable evolution of Homo sapiens into Homo faber and the dissolving of human/technological boundaries and, for the architect, the necessary drive for “collective welfare-socialism” and the systematisation of its built manifestations.

[3] For a detailed analysis of the figure of the demolition worker see; Nicholas Beech, “Demolition Figures: The Appearance and Expression of the Topman and Mattockman in LCC Contracts, 1941–1951,” Architectural Research Quarterly 16, no. 3 (2013).